Crouching, pouncing and rolling on her back…
A year ago I accompanied my sweet Sadie Cat to her last veterinarian appointment. She was curled up in her carrier. She made herself a small ball, but still able to peer out of the mesh to see what was going on around her. Safety was found in her carrier. This was her safe space. Her hiding spot. Her favorite spot to nap. And her go to when the vacuum cleaner came out. Sadie was 19 years old at the time of her final road trip. She was blind, deaf and had dementia. When I finally managed to dump her out of her cat carrier, which involved literally turning it upside down and removing her claws from the soft cushion one by one, she sat on the cold, sterile, metal table and put her head in my armpit, as she had done countless times in our eighteen and a half years together. Like an ostrich with her head in the sand, this was her way to avoid anything unpleasant. I remembered our first car ride home from the shelter together. I was in the passenger seat of my car, with Sadie, a six month old kitten, sat on my lap, her head firmly in my armpit. From here a fast and solid friendship was born. She was my most trusty sidekick and my longest relationship.

Sadie Cat was an independent, yet social kitty. She loved being around the action and the people, but was by no means a lap cat and detested being picked up. The moment she felt those hands clamp around her midsection and vault her off the floor into a human’s arms she would start “the squirm”. If for some reason you were able to hang on, she would place her paws squarely on your chest and push away with as much force as her feline body could muster. This often resulted in her catapulting off your chest and leaving microscopic holes in your shirt. She was the most content to sit next to me. Her front paws crossed in a manner suggesting she was a lady, yet still able to reach out and tap my arm, which happened frequently if I was eating something she deemed tasty. She had discerning taste for a kitty, but one thing she could not say no to was Smart Food. Yes, the white cheddar popcorn. Regardless of what cozy hiding spot or warm sun patch she had chosen to curl up in, if she heard the bag of Smart Food being opened she would emerge, often still blinking the sleepiness out of her eyes and whisper a few ‘mews’ my way for a taste. 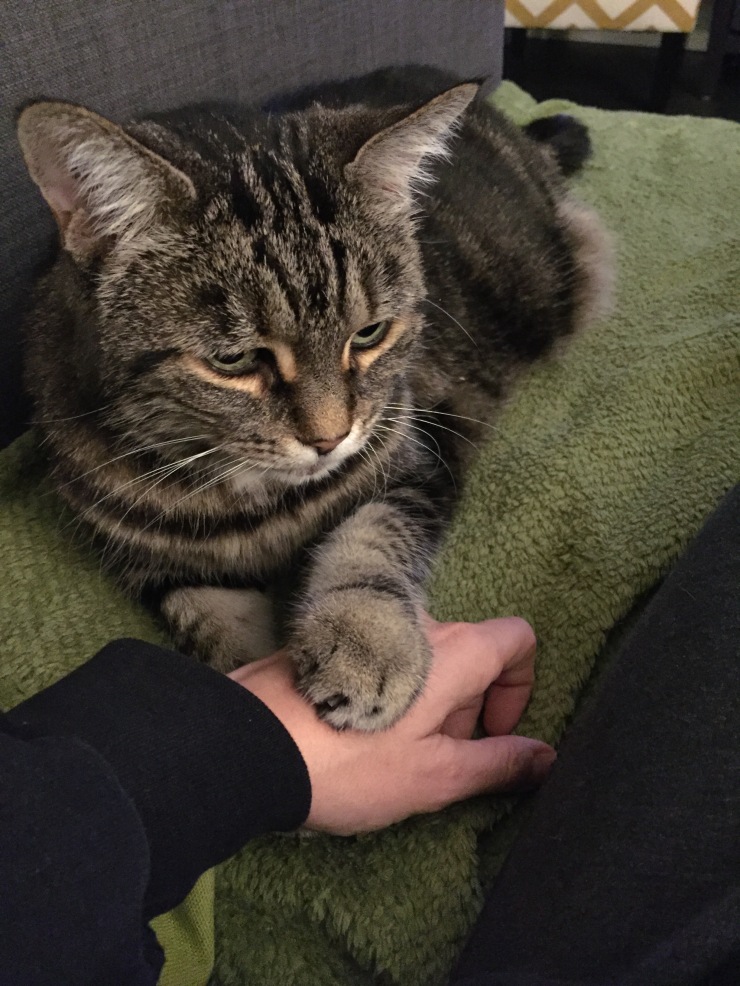 Sadie was a hunter. When I was in my early to mid twenties I lived in a basement suite in Saanich on Vancouver Island. My roommate, who was a high school buddy, would get so frustrated by Sadie “asking” to go out and come in on the regular. The house was on a good chunk of land and the yard backed onto a green belt, it was perfect for hunting. On several occasions, Sadie would come barreling for the front door, after being called in, with a mouse hanging out of her mouth. Eventually, we decided to leave the tiny bathroom window open for her. Since we were in the basement suite, this window was low to the ground and enabled Sadie to come and go at will, without annoying us. However, this meant daily morning “presents” at my bedroom door and further annoyance to my ultra clean roommate as Sadie did not wipe her feet prior to launching through the window. In one particularly unfortunate incident, Sadie decided to bring her ‘spoils’ of the hunt into the house to finish the job. My roomie came home to find Thumper completely destroyed all over the living room. I was away for the weekend, working in a remote community as a paramedic. She called me and I could barely understand her between the yelling and the expletives. I am still certain that my cat did this on purpose to make her crazy.

I moved around a lot in my twenties and Sadie was always up for the adventure. When arriving at a new place she would slink around and dart from corner to corner, checking out all the new hiding places and vantage points. Even as a nomad and a twentysomething, I knew that wherever my next adventure would take me, it would involve Sadie. It never crossed my mind at any time to leave her behind, find a more ‘stable’ owner (see less nomadic) or give her away in any sense. Therefore when the decision was made several years ago to uproot, once again, from the Lower Mainland and make my way to the Caribbean, I never considered doing this without my sweet little Sadie Cat. When I initially moved to the Bahamas, my friends offered to catsit Sadie until I got my feet under me. They were considering adopting a cat and taking care of Sadie would be like a trial run. I remember bringing all her belongings and a Sadie Cat, again curled up in her cat carrier, to their condo. It was a warm August evening and had already gotten dark. I didn’t want to leave her. She was 15 years old at the time and I knew that anything could happen. I had promised her, years earlier, that I would be there at the end. But I didn’t know…I would be thousands of kilometers and two plane rides away…I reluctantly left her there, knowing they would love and take care of that old timer and made my way to the Bahamas.

A mere two or three months later, I returned for that cat. I had never traveled with a cat, or any pet for that matter, on a plane. I had all the paperwork safely tucked away in the carrier and was ready for our new life. My vet in Canada did not want me to give her any sedative if I could help it. As she was an older kitty, he was concerned about her kidney function. He gave me a pill, just in case, and told me to only use half of it. I put her in her trusty cat carrier and on the seat beside me in the taxi, and was terrified. She did great…all through security, through the waiting for the plane, through the boarding of the plane…I finally got settled and stowed Ms. Sadie under the seat in front of me and breathed a sigh of relief. Until we started to taxi. The howling started…a low guttural sound at first, slowly escalating to a full out meow/howl. Once in the air, and at cruising altitude, the meowing did not stop. Thankfully the middle seat was vacant and I brought Sadie’s carrier to the seat and slide my hand in the carrier to pet her. Still not settling down and now feeling like every parent on an airplane with a screaming child, I reached for the sedative. “Only give half, if any at all,” the vet had said. With one hand in the carrier, I managed to extract the pill, I bit it in half and somehow managed to shove the other half into Sadie’s mouth. Giving a cat a pill is an art form, on an airplane, midflight, one handed was sheer will and force. It took her half the flight to settle. I think she was effectively “stoned” as we landed in Toronto. First leg complete. I hurried to the next gate and with a 2 hour layover, found a ‘family’ bathroom and hunkered down in there with Sadie. She was out. I felt awful….worried…guilty…as she lay there partially drooling and sleepy. But she was quiet, mercifully, quiet.

She settled in to the Bahamas life quite nicely, with no lasting ill effects from the “sedative incident”. She loved all the sun patches and I’m convinced the sun felt good on her old bones. She didn’t go outside anymore and slept more and more every day. She still sat by the window and watched the world go by, arms crossed in front of her. I was sitting on my comfy chair one day, by the window, reading my novel, Sadie was curled up on the floor in her chosen sunbeam. She was breathing rhythmically, indicating she was in a slumber. A gecko, our frequent house guests, slinked across the floor. As it got closer to Sadie, I watched intrigued by the sheer bravery of the little lizard. With Sadie fast asleep, perhaps the gecko was lulled into a false sense of security? All of a sudden, Sadie’s paw shot out and slammed down on top of the lizard, making him one with the tile floor. She was still a hunter. After this incident, the gecko body count started to pile up. Sadie had a second wind, it involved stalking and “playing” with the house lizards.

Two years later, Sadie and I returned to Vancouver. She made the return trip a little easier, likely because I was more prepared! Over the next few years, she would decline more rapidly. But she never stopped talking, or sitting next to me, or stalking whatever she could find. Sadie made it to 19 years of age. I miss that little cat every day. 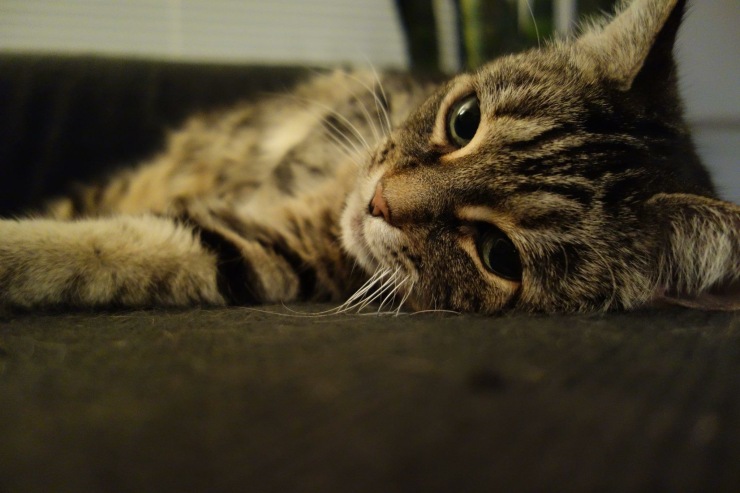 6 thoughts on “The Cat Who Stalked Lizards”